Patrick, Tarpenning and Bigelow families were original settlers on the Post Road Green Settlement.  I was able to visit Union County and hear the wind and bird song. I was amazed by the sea like landscape and held great respect for the labor My People poured into the land. 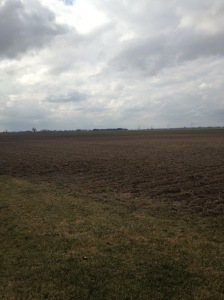 My ggg grandfather David Patrick learned to farm from his father, his grandfather, uncles, cousins and brothers. He likely learned most from his two older brothers, Levi and Ransom. The Patrick brothers worked together in their teens and twenties. They depended on each other because they had lost their father and grandfather.

With three strong young men as workers on a farm, they could bring in more wheat, oats and hay than a farmer on his own. They farmed before machinery was regularly used and cut down wheat and oats with hand scythes or sickles and bundled into sheaves. The grain was flailed and winnowed by hand.

Ransom, Levi and David grew their own animal feed and seedcrops. They grew food to get through the winter. The main crops were wheat, cattle and corn. All labor intensive and subject to the ups and downs of the weather and commodity markets.  Hail could take out your seedlings. Varmints could get get the corn before it made it to the corn crib for winter. The price could plummet and the year could be lost.  Frontier life is sustenance living. Cash money was scarce and little there was would be set aside for paying taxes. David grew up in a barter economy. A bushel of wheat could be traded for butter, a blacksmith repair, a bolt of cloth.

David learned to hunt, fish and trap in the tall prairie grasses and along the wooded banks of the Big Darby River. It was a big moment in a boys life to learn to shoot and taking proper care of a family fire arm. Farm boys learned to fish and trap small game long before they had a opportunity to shoot a rifle.

David grew up not just a farmer, but a citizen farmer responsible for self governance of town and state. In addition to learning how to work a scythe, he learned the Constitution and Bill of Rights. His Scots-Irish family was fiercely protective of their rights and liberties. Not only did you farm the land, you were also expected to defend the land and the Republic.

MY PATH TO MOSES PATRICK